One thing I didn’t mention on the home page was that I also picked up new photo gear. It was a major upgrade as for years I stuck with the micro four-thirds system. Its smaller sensor and flange length (or the distance from the camera’s lens mount to the sensor) lets you adapt many old lenses to use with it. Many consumer and prosumer video cameras often use sensors smaller than a micro four-thirds anyway. So when I was a poor digital media professional back in the day, I leaned on this system since I already had the screw mount lenses and couldn’t afford the better ones.

It was better video-wise, but the one thing that was consistent was the trouble with low light performance. I’d be doing a video and photo shoots indoors and I’d have to jack up the ISO and get plenty of noise in return. This was the same way while using a Canon GL2 when I owned it. Remember that? Awesome color reproduction, but when you get indoors, forget it.

Fast forward to today where I’m a digital media pro and can actually get a full-frame. Finally. Low light ain’t going to slow me down (much). I picked up a Sony a7iii and started with two used Sigma F2.8 lenses and not the more recent ones but the generation before that were for the Canon mounts. I used them with a sigma MC-11 Adapter for the E-Mount. The autofocus apparently works way better with sigma’s newer lenses branded Contemporary, Art or Sport. So anything older like I had, or anything non-sigma that fits a canon, forget about it; the autofocus was unreliable. With the Sigma 2.8 70-200, I did get some sweet bird shots while out in High Park during the first week of cherry blossoms, except no cherry blossoms, was a week early. I ended up returning that lens and went full native.

Here are the best pics I took with the Sigma lens. No cherry blossom, but, treated to some cool birds. The look of that hawk….. 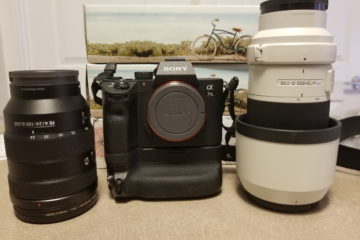 This post is part of a set of posts that will explore my experiences with my new photo and video setup while at the Toronto Pro Supershow’s Fitness and Bodybuilding Expo. Like previous Toronto Pro Read more…