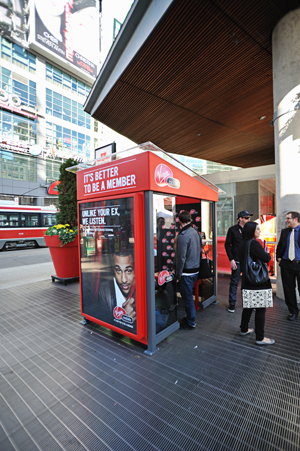 In 2010, Fourthwall was brought in by Juniper Park to create a branded photo and video kiosk experience for Virgin Mobile Canada. The video booth itself was placed right in the one of Toronto’s busiest shopping districts, Yonge-Dundas Square. It was awesome seeing Sir Richard Branson himself use the booth first during his brief stay in Toronto.

For this project,  I implemented a middle-end solution with encryption that involved the automated encoding and delivery of multimedia files from the kiosk to the website.

I also built the website where users who used the kiosk would see their photos and videos taken at the kiosk through a link from an e-mail they received. The backend for asset management and moderation was built with CakePHP.

tell me about your Next project